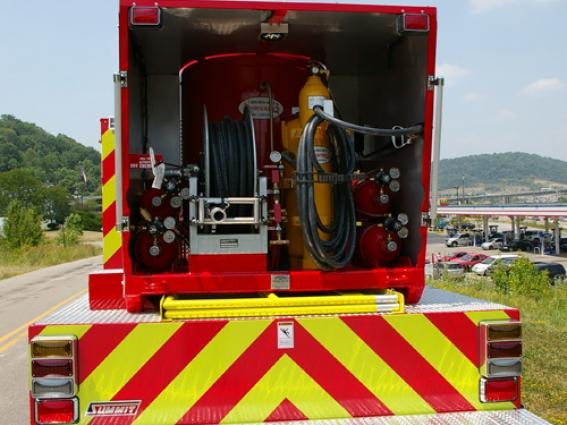 Designing a new piece of apparatus for your department starts with determining the manufacturer, the model and the features you need, right? Wrong. Planning for an apparatus actually starts long before that—it starts with understanding your response area’s target hazards and needs, and how you expect the new vehicle to meet them. Only then can you begin to design the actual vehicle.

This is exactly the approach that Chief Ralph Hammonds and the Sharonville (Ohio) Fire Department (SFD) took when they designed a new specialized vehicle for their department.

“Approximately four years ago, we began planning for a dry chem unit,” Hammonds says. “Our response area encompasses a great deal of truck traffic since we are in the middle of Routes 75 and 275 just south of Cincinnati.” The community is also home to a Ford Motor Company transmission plant and sees a large amount of rail movement. These features bring a large amount of hazardous materials through the community—which in turn created the need for a dry chemical apparatus.

“We originally looked at a twin-agent type of unit that would dispense foam and dry chemical,” Hammonds says, “but because of having to stock a greater amount of foam, we decided against purchasing this type of vehicle. We also looked at skid-mounted units but concluded they wouldn’t meet our needs.”

After working on the specs, the proposal was sent out to competitive bidding; Summit Fire Apparatus was the successful bid winner. “We were happy about that because we’d purchased several pieces of apparatus from them in the past and were happy with their work and service,” Hammonds says.

Once the chassis was delivered to Summit, the vehicle was built in about seven months. “One of many reasons we were happy with Summit building the vehicle was that it was only 36 miles from our community,” Hammonds says. “We were probably at the factory at least several times month. This provided us with the ability to see the truck built from the ground up.”

The SFD’s proper planning paid off; they had few major changes to the vehicle during the build process. “The only real change was to downsize the front compartment, to make it a better fit for us,” Hammonds says.

Burner Fire Control of Lafayette, La., designed the dry chem portion of the vehicle. “What’s great about the operation of this vehicle is that you can use as much or as little of the dry chemical product as you need,” Hammonds says. “In some of the other units that we looked at, once you discharged at a fire, you have to dump the whole amount of dry chem and then refill. This type of operation can be costly to say the least.”

Following delivery, both Burner Fire Control and Summit provided training to department members on the operation of the new vehicle.

New Life Float Apparatus must comply and “ensures that no part of an individual is immersed in...

The Jessup (PA) Hose Co. turned to KME to build this walk-around rescue truck that includes a...