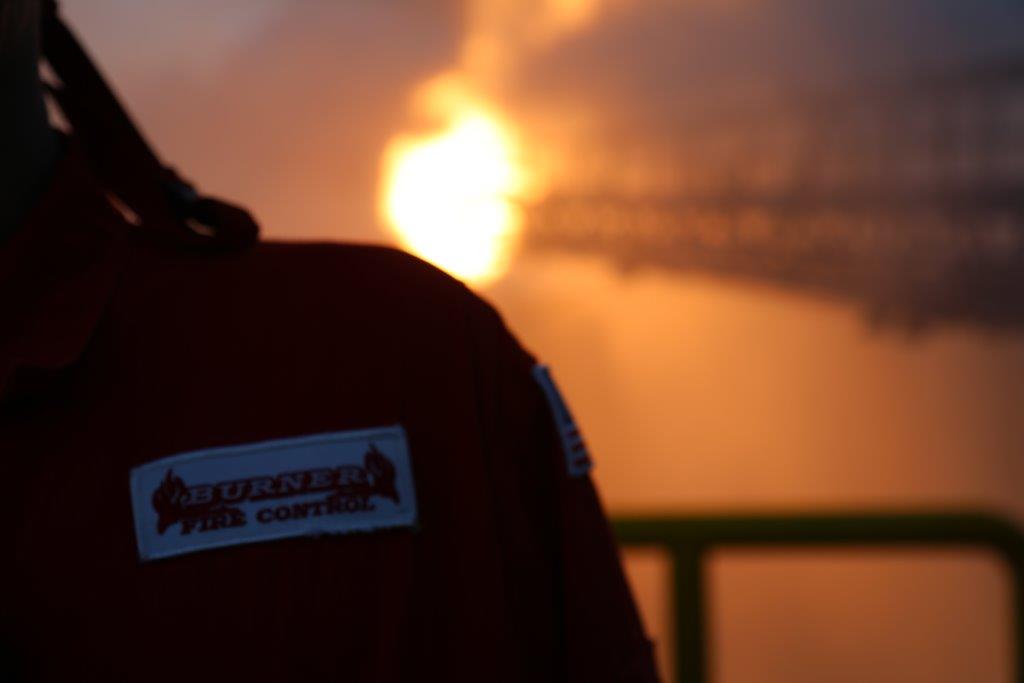 LAFAYETTE, La., July 27, 2010 — Days after the blowout and sinking of the Deepwater Horizon Drilling Rig, Burner Fire Control, a Lafayette, LA-based company, was called upon to mobilize an emergency response crew to provide rig cooling services, more commonly known throughout the industry as a “Water Curtain(R)” package to deploy aboard the Transocean Discoverer Enterprise. The purpose of this Water Curtain(R) system was to allow the rig to burn off any oil and/or gas captured from the damaged well, without causing catastrophic damage to the rig. When oil/gas is burned off, or “flared,” tremendous radiant heat is generated. This radiant heat is so intense it is capable of damaging or destroying any structure or equipment that is exposed to it. During non-emergency operations, the Water Curtain(R) system is deployed to drilling rigs during well testing operations. The system saves oil companies time and money by allowing well tests to continue regardless of external factors, such as changes in wind speed or direction, increases in oil/gas flow rates, etc.

Shortly after operations began aboard the Enterprise, several additional drilling rigs, FPSOs, offload barges, and support vessels were mobilized to support the ongoing response efforts. These vessels/rigs include the Helix Q4000, Hornbeck Offshore Achiever, Transocean Clear Leader, Barge Massachusetts, Helix Producer I, and the Well Testing Vessel Pisces. Burner was tasked with providing additional Water Curtain(R) systems, safety equipment, and personnel on all seven of these vessels/rigs simultaneously. For a company with just under 100 employees, to say that Burner was challenged to support the entirety of these operations would be an understatement. However, with the dedicated support of all of their employees, as well as the invaluable assistance provided by all of their suppliers, Burner was able to meet all demands placed on them. As of July 23, 2010, Burner personnel and equipment were still deployed aboard all seven vessels/rigs named above, maintaining 100% readiness with triple redundant backup systems in place. This redundancy has allowed the Water Curtain(R) system to run continuously now for several months, with virtually no downtime experienced. Without Burner Fire Control’s Water Curtain(R) System, flaring operations would have been severely limited in both the amount of product burned off and the duration in which the burn could operate, due mainly to excessive radiant heat exposure and varying weather conditions.

The Water Curtain® Rig Cooling System was pioneered in the early 1980s by Burner Fire Control, in conjunction with Amoco Oil Company. In fact, Burner Fire Control owns the registered trademark phrase “Water Curtain(R),” making it the ONLY company which can legally use the term. Burner has performed more than 700 successful Water Curtain(R) projects worldwide, with a perfect track record. Burner’s Water Curtain(R) System is currently working, and/or scheduled to work on projects in the Gulf of Mexico, Brazil, China, the Middle East, and several other areas. Mr. Butch Ridgedell, Manager of the Water Curtain(R) Division and 30 plus year employee of Burner Fire Control, attributes the success of the Water Curtain(R) to two main factors: “First, our employees are second to none in terms of operational experience and system knowledge, which gives us a unique advantage in the industry,” and second, “Our perfect track record on high profile projects over the past 25 years allows customers to be assured that their investment will be protected regardless of unknown external and environmental factors.”